The “EUCLID University Treaty” is a multilateral treaty in simplified form, embodied in the form of  two distinct instruments. Each instrument is registered and published as separate treaty, bearing in mind that “treaty” means any instrument signed between States, in written form, governed by international law, regardless of the instrument’s designation (exchange of letters, convention, accord, memorandum, terms of reference, etc). 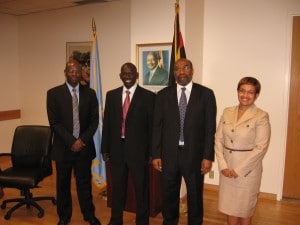 Photo above: a EUCLID delegation visits the Ambassador and Permanent Representative of Uganda in New York following the initiation of Uganda’s participation in EUCLID in 2008.

The initial instrument is formally entitled: “Open Memorandum of Understanding (MOU) between the Participating EUCLID Parties regarding their Participation in the Educational Framework defined herein”

The UNTS registration number is: 49006

The UNTS certification of registration can be found here (click on link to open).

The integral annex (Statutes) can be found at: http://www.euclidconsortium.org/statutes.pdf

The updated instrument is formally entitled: “Updated Framework Agreement regarding the Parties’ Participation in EUCLID as Constituted and Defined herein”

The UNTS registration number is: 49007

The UNTS certification of registration can be found here (click on link to open).

The integral annex can be found at: http://www.euclid.int/statutes.pdf